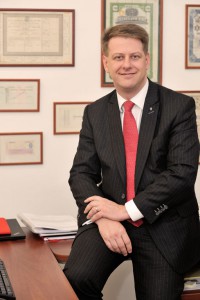 I was born in 1973 in Ostrava, „the steel heart of the country“ at that time, and moved to Prague when 18 to study economics, diplomacy and journalism. I made sure to use each of these fields during at least one part of my career. As a journalist, I founded what is still the largest personal finance website (Penize.CZ), economics and diplomacy became especially useful when I became deputy minister of finance, responsible for fiscal policy, financial services, EU and foreign affairs. After leaving the government service for the first time, I cofounded a personal finance advisory company and in 2012 moved to another of my favorite cities, Washington, DC, to work for the World Bank.

In January 2014 I returned to Prague to coordinate the Czech EU policy. Strengthening our position in Brussels and with our key partners is the key priority – as well as the need to make us understandable and coherent. The issue of Czech entry into Eurozone is a special hobby (and not only because I became the first Czech „Mr. Euro“ in 2005).

After leaving the government I have founded a consulting company EU Politics Advisory, focusing on issues related to the European Union and digital economy.

I love to read (but have no time to do so), I enjoy classical music and opera and when I really need to relax, I tend my rose garden – a third generation family hobby.

In 2016 I received the supreme French state decoration, the National Order of the Legion of Honour (Ordre national de la Légion d’honneur), for my work in support of European integration.